This post is archived and will not longer be updated.

Coming from Haskell and Python I found releasing a Scala library a cumbersome process. The standard Maven Central archive lacks a convenient web interface like that of Python’s package index or Haskell’s Hackage, and comprehensive documentation about publishing. Getting an artifact to Maven Central for the first time involves a surprising number of manual steps and a rather elaborate SBT configuration.

In this article I hope to connect all the loose ends and offer a comprehensive stepby-step guide from nothing to a Maven Central release. I will start with some prerequisites which lie outside the scope of this article, guide you through the necessary bureaucracy and cover the setup. At the end I’ll introduce sbt-release, a powerful plugin to automate the entire release.

I’d like to keep this article up to date as the process changes. If you find any outdated information in here please write a mail to sebastian@swsnr.de or mention me on Twitter.

GPG comes in three different versions: GPG 1.x, GPG 2.0 and GPG 2.1. All these versions are incompatible with each other, and—to a varying degree—also with existing tools around GPG. In particular, due to a change in the internal storage format in GPG 2.1 most existing GPG tooling cannot use private keys created with GPG 2.1 at the time of writing.

I recommend you avoid GPG 2.1 and stick with version 2.0 until tooling becomes compatible—you can upgrade to GPG 2.1 later. I suggest to pick a graphical user interface, such as GPGTools for macOS.

Summary: Pick a group ID, either by reversing the name of domain (example.com → com.example) you own or the name of your GitHub pages domain (User example → io.github.example) if you do not own a domain.

Maven, and by extension Maven Central and SBT, put all artifacts in namespaces called “groups”. You see these groups in SBT dependency specifications:

This expression specifies a dependency on the artifact with “artifact ID” cats in the org.typelevel “group ID”. The same artifact ID can appear under different group IDs and refer to a entirely different artifact. In other words, "com.example" %% "cats" % "0.9.0" refers to a different artifact than the above and has no relation to the actual Cats library. Groups avoid collisions in common names1 and allow you to publish patched or forked versions of a library without interfering with the upstream project.

To publish an artifact to Maven Central you need to choose your own group ID first. Most people choose reverse domain names2 as group IDs. For instance, the Typelevel organization which maintains the Cats library (see above) owns the domain typelevel.org so the org.typelevel group ID has the official cats artifact. Likewise I use the group ID com.lunaryorn, from my domain lunaryorn.com.

If you own a domain related to you or—even better—to the project or library you plan to release use it for your group ID. If you release a library on behalf of a company, eg, your employer or an affiliate, use the brand domain of the Company. For instance, if you released a library on behalf of the hypothetical Acme Corporation owning acme.com you would use com.acme as group ID. If you do not own a domain but have a GitHub account you may use the domain of your GitHub pages instead. For instance, my GitHub username “lunaryorn” gives me the GitHub pages domain “lunaryorn.github.io”, leading to my “GitHub” group ID io.github.lunaryorn.

Summary: Create an account on the Sonatype issue tracker and add it to the credentials setting in your global SBT configuration. Then create an issue to add your project to Maven Central.

To publish artifacts from SBT—we will automate the entire release with SBT later in this article—add these credentials to the credentials setting of SBT (replace the placeholders with the actual credentials of your account):

Do not change the first two arguments; they must match the authentication challenge of Maven Central for SBT to associate the credentials with the repository.

I keep this setting in ~/.sbt/0.13/credentials.sbt as part of my global configuration but you can also add it to a per-project SBT file. Just make sure to keep the file safe and do not commit it to a public repository!

Register your artifact and group ID on Maven Central

Summary: Create a new issue to register your artifact and group ID, and wait until Sonatype grants you access.

Login with your account (see above), create a new issue. You will see the following form now: 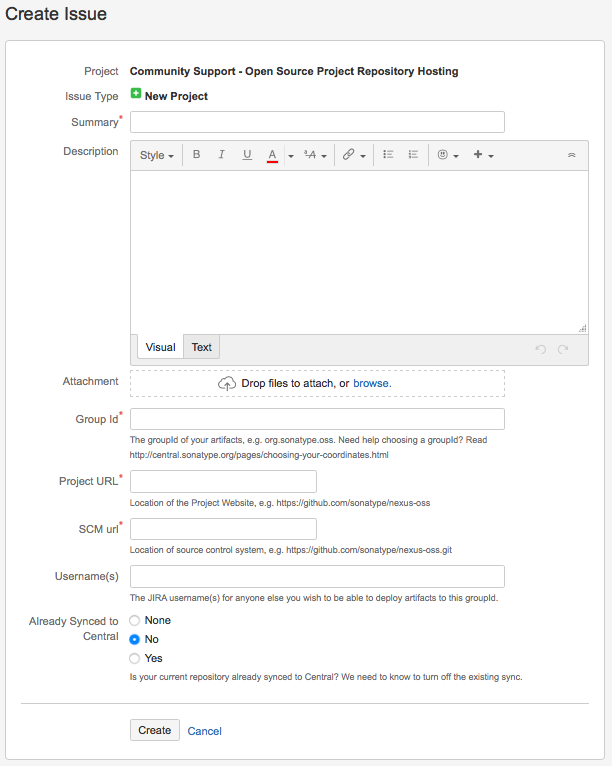 Fill it as follows:

Summary
Briefly mention the project you’d like to add to Maven Central.
Description
Describe what purpose your project serves and what it offers.
Group Id
Enter the group ID you chose above.
Project URL
Enter the URL to the homepage of your project, or the GitHub README.
SCM url
Enter the URL to the source code of your project, accessible by a version control system like Git or Mercurial.
Username(s)
Add the Sonatype Jira user names of any users you’d also like to allow to publish the artifact using their own accounts.

After submitting the ticket Sonatype will review your request. According to Open Source Software Repository Hosting (OSSRH) Guide, Create a ticket with Sonatype this takes less than two business days—I received confirmation after a couple of hours. Sonatype warns you not to try and publish anything before the ticket enters the Resolved state. I do not know what happens if you do, but I presume you will need another round with Sonatype’s support if you do—better avoid it in the first place.

Add this metadata to the build.sbt of your project. Without this metadata Maven Central will reject your artifacts when you try to publish.

Summary: Add the sbt-sonatype plugin to your build, enable the publishMavenStyle setting in build.sbt and set the publishTo setting to sonatypeDefaultResolver. Add the sbt-pgp to enable GPG signing of artifacts.

While SBT installs dependencies from Maven Central by default it does not publish to Maven Central without further configuration. The sbt-sonatype offers settings and commands to publish to Sonatype repositories, including Maven Central. Add this plugin to the project/plugins.sbt of your project:

Then add the following settings to build.sbt to force SBT to publish Maven style artifacts (as opposed to the default Ivy style) and point SBT to the Maven Central repository:

As said above Sonatype requires GPG signatures for artifacts, but SBT does not support GPG by default. You need to add the sbt-pgp plugin to project/plugins.sbt:

You also need a working GPG setup which I do not cover in this article. See the Prerequisites section above for help.

Summary: You can now publish manually with publishSigned and sonatypeRelease.

I recommend to automate releases with the sbt-release plugin which I cover in the next section below but the configuration so far lets you now publish artifacts manually.

I suggest to start with a snapshot version to check whether Sonatype authentication works. Open a shell in the directory of your project and type:

The publishSigned task comes from the sbt-pgp plugin configured above. It builds your project, packages byte code, sources and scaladoc into JARs, signs them with GPG and publishes these to the Sonatype snapshot repository because the version has a SNAPSHOT suffix. You can publish snapshots to this repository as often as you like which makes it the ideal testing ground for your publishing configuration.

The task will ask you for the passphrase of your GPG key along the way to sign archives. If signing and publishing work you will see that SBT publishes

In this case you can now try to publish a stable version if you like, but you cannot retract stable versions from Maven Central. Make sure that your project allows for a stable release before continuing with this guide!

Publishing a stable version requires two stages. In the first step you publish to the staging repository:

Unlike before the task will now publish to the staging repository because the version lacks the -SNAPSHOT suffix. You can publish to staging as often as you like without harm but you cannot use artifacts from staging.

To promote your artifacts to the actual Maven Central repository and thus make them available to the public run the following command in the SBT shell:

This task contacts a special REST API of Sonatype which asks Sonatype to verify your artifacts. Sonatype now checks all requirements for Maven Central, ie, GPG signatures, required metadata, presence of doc and source JARs, etc. If Sonatype rejects your artifact at this stage you can fix the offenses and try again as often as you need.

After a successful sonatypeRelease the artifact moves to Maven Central, but can take up to ten minutes to appear there.

Summary: Add sbt-release to automate the entire release, from building and testing, to bumping version numbers, to publishing and pushing changes. To use this plugin with Maven Central set releasePublishArtifactsAction to publishSigned and add sonatypeRelease to the releaseProcess. For projects that support different Scala versions also enable releaseCrossBuild to release for all supported versions at once.

If you prefer to automate releases I recommend the sbt-release plugin which provides a simple release task to cover all the following steps:

Add the plugin to project/plugins.sbt:

Then add the following settings to build.sbt for seamless integration with Maven Central:

With these settings sbt-release publishes signed artifacts as required by Maven Central and automatically promotes artifacts from staging to Maven Central (see above) as last step.

If your project supports different Scala versions, eg, 2.11 and 2.12, via crossScalaVersions also enable releaseCrossBuild to release for all versions at once:

With this configuration releases become as simple as running sbt release! The command will

If you do not like the default messages for tags and commits change releaseTagComment and releaseCommitMessage respectively. I prefer the following style:

Use whatever you like or whatever the conventions of your project require.

GitHub has a brief guide about GPG setup.

The README of sbt-release show how to define custom release steps. The refined library for instance defines custom steps to update the changelog and README before a release and upload documentation to Github Pages, see build.sbt, line 369.

Timothy Perrett wrote about his continuous delivery approach where he uses the sbt-rig plugin to release every single commit on master. The sbt-rig plugin bundles sbt-release and other plugins to offer a simple abstraction over releases. Justin Kaeser (@ on Twitter) just told me about sbt-release-early which offers a simple approach to “Release Early, Release Often”. I find it interesting and think about trying it in my next project.

Sonatype’s own OSSRH Guide documents publishing to Maven Central, albeit in terse form, with much information hidden in videos. I use it as reference but found it a poor introduction for new users. The SBT manual includes a guide to Using Sonatype which covers the SBT setup in some detail but looses little words on the Sonatype bureaucracy.

The official SBT documentation improved a lot and has now become a great resource to learn and to understand SBT.